Jeremy and Celia return a week early from their unsuccessful honeymoon to find that both Jeremy’s partners have accepted his offer to stay in his house while he is away. The only problem is that they have each brought the other’s wife with them. Jeremy discovers one illicit couple, Celia the other. Both issue invitations to them for dinner. Complications pile up thick and fast as, realizing their dilemma and desperate to make a good impression on Jeremy’s colleagues, the couple stages two dinner parties simultaneously, one on the patio and one in the dining room. As if there aren’t problems enough, Sid the plumber, up to his eyeballs in water in the cellar, has to call in the Water Board Emergency Service just when all seems resolved and Jeremy and Celia are attempting to salvage their lost honeymoon.

Unger and Madison are at it again! Florence Unger and Olive Madison, that is, in Neil Simon’s hilarious contemporary comic classic: the female version of The Odd Couple. Instead of the poker party that begins the original version, Ms. Madison has invited the girls over for an evening of Trivial Pursuit. The Pidgeon sisters have been replaced by the two Constanzuela brothers. But the hilarity remains the same.

The perfect follow up to “Always…”. Country classics combine with a hilarious story about three good ole gals who follow their dreams to Nashville. Songs include Stand By Your Man, Coal Miner’s Daughter, 9 to 5, I Will Always Love You, and Harper Valley PTA. Sold out runs at the Barter Theater, Abingdon, VA and the Flatrock Playhouse, Flatrock, NC and many other theaters throughout the country.

The creator of “Always…Patsy Cline” combines over 30 classic country tunes with a hilarious story about three gutsy gals who are determined to better their lives and follow their dreams to Nashville. The all-hit song list includes I’ll Fly Away, Stand by Your Man, 9 to 5, Coal Miner’s Daughter, Ode to Billy Jo, These Boots Are Made for Walking, Rocky Top, and I Will Always Love You. This charming, foot-stompin’ musical has played to sold-out audiences across the country. – Broadwayworld.com

“You’ll have to step on your toes to keep them from tappin’.” -Asheville Times 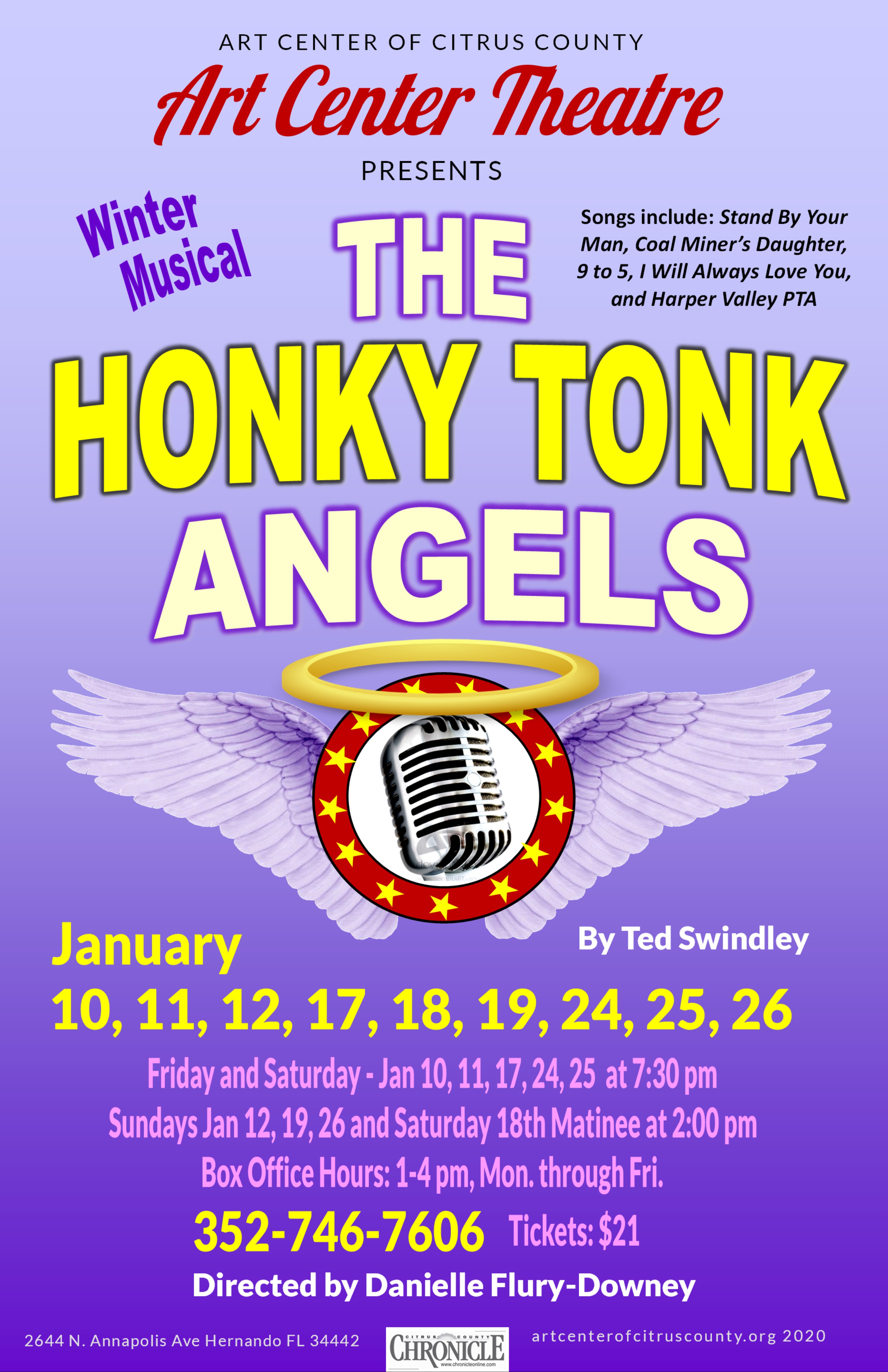 A comedic mystery with shades of Sherlock Holmes opens Friday, Nov. 1, for a three-weekend run at the Art Center Theatre in Citrus Hills.

“The Game’s Afoot” is set in the 1930s and takes place in the Connecticut home of William Gillette, an actor and writer who played Sherlock Holmes on stage for over 25 years.

Gillette has invited friends and a famous theater critic to his home for a Christmas celebration only two weeks after there was an attempt on his life in the theater.

He hopes to use this holiday party to uncover the would-be killer, but as the evening continues, it becomes increasingly clear there is a killer on the loose, and increasingly unclear who it is.

Add in witty comic lines and a cast of interesting characters, and the play serves up a delightful dish of comedy and mystery before it all comes together in an unexpected conclusion.

Edwin Martin painted the set and Nancy Hoffman was the costumer. Technical design of the play is by Eayn Flanagan. Sharon Harris and Dianna Haynes did the artistic design and specialty painting.

It is December 1936, and Broadway star William Gillette, admired the world over for his leading role in the play Sherlock Holmes, has invited his fellow cast members to his Connecticut castle for a weekend of revelry. But when one of the guests is stabbed to death, the festivities in this isolated house of tricks and mirrors quickly turn dangerous. It is then up to Gillette himself, as he assumes the persona of his beloved Holmes, to track down the killer before the next victim appears. The danger and hilarity are non-stop in this glittering whodunit set during the Christmas holidays.

It is December 1936, and Broadway star William Gillette, admired the world over for his leading role in the play Sherlock Holmes, has invited his fellow cast members to his Connecticut castle for a weekend of revelry. But when one of the guests is stabbed to death, the festivities in this isolated house of tricks and mirrors quickly turn dangerous. It is then up to Gillette himself, as he assumes the persona of his beloved Holmes, to track down the killer before the next victim appears. The danger and hilarity are non-stop in this glittering whodunit set during the Christmas holidays.

Love, Lies, and the Doctors Dilemma

The first ‘play’ of the new season a comedy/drama by Michael & Susan Parker, Directed by Larry Mitchell

Joan Scheller lives with the great love of her life, Sandy. In an effort to hide her relationship, she introduces him as her psychiatrist. One little white lie leads to another. Before long, Vinny the Enforcer, a quintessential Italian mobster, masquerades as her security guard, while her son, Chris, is forced to wear a dress and become her daughter Christina. Further complications occur when her new neighbor, Rachael, whose life appears to be a series of catastrophes, creates chaos and confusion wherever she goes. “The Doctor” is in. Has Joan created a monster? Everyone wants a session. Olivia wants to discuss her love life, Rachael wants to know why she’s such a disaster, and Vinny wants to discuss his work as an “Enforcer.” Sandy is forced to listen and give misguided advice, which, to everyone’s surprise, seems to work. But what about love? Of course there’s Joan and Sandy, if they can survive Joan’s white lies; then there’s Rachael, who is strongly attracted to Chris, if he can survive her mayhem. Finally, there’s Olivia, who hires Vinny away from the mob to be her personal security guard (With benefits?). Little white lies create mistaken identities and chaos in this enchanting love story.